Necklace And Health Care: a strange combination, isn't it? Can you make any association between a necklace and health practice?

Suranjana Tewari, a BBC News Reporter in Mumbai is answering the above question in the following article.

"Around 1.5 million children die around the world every year from diseases that could be prevented through vaccination. India has one of the lowest vaccination rates in the world at under 60% - well below the World Health Organization's 90% target.

But in rural Rajasthan, a simple necklace - which contains a child's vaccination records in a computer chip - is helping boost the numbers protected.

Khushi Baby - which means happy baby - is a plastic pendant on a black string. A computer chip embedded in the pendant stores vaccination data of the baby wearing it, along with the mother's health records.

By keeping the information on the child rather than on medical cards which can be lost or on paper logbooks that can become cumbersome and are almost impossible to search through, health workers can ensure babies get the right vaccinations at the right time.

The chip communicates with a smartphone or tablet, allowing health care workers in remote areas to access real-time data on the child's vaccination schedule.

When the health worker returns to the city, the data is uploaded to a central cloud allowing them to take the right supplies on their next field visits.The Ministry of Health and other health officials can also access the data.

Eight-month-old Guddia Damur has had all the required immunisations for her age.Guddia is a term of affection for newborns but with births rarely being registered in parts of India, it is a common name.The sheer number of children called Guddia creates confusion under the paper-based system.

But thanks to Khushi Baby, Guddia's mother Babli says health workers are always able to access her data on the spot. The necklace also reminds Babli of when her next injections are due. 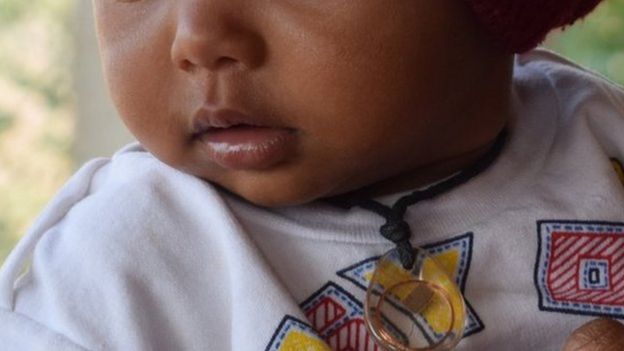 Local mothers were involved in the design of the necklace. It's similar to those worn by newborns in parts of India called a 'tabeez'.Babli said: "Women make our babies wear the black thread around their neck, so that babies are protected from the evil eye."

For researchers, marrying tradition with technology converts a superstitious belief into better health behavior.
Mohammed Shahnawaz, one of the team behind Khushi Baby, said: "It has got a cultural significance here and people do wear such type of wearable in this part of India.

"This pendant is less than a dollar cost, it's rugged, waterproof and can be replicated into other form factors like bangles for mothers, like watches for elders."

Khushi Baby was originally designed by undergraduate students at Yale University in 2013. Since then the team has gone on to raise $350,000 in funding and has partnered with a local Indian NGO.Around 1,500 babies are already in the system, and initial data is showing improved vaccination rates.

Once the mother's contact details are in the system, the family is automatically reminded - in their local dialect - why vaccinations are needed, and when to bring their children to the next vaccination camp.Mothers say the necklace also acts as a visual reminder about their child's immunisation schedule.